Introduction: Early recurrence of hepatocellular carcinoma (HCC) is a major risk factor affecting survival even after hepatectomy. Many clinical, biochemical parameters and pathological grading like fibrosis 1 index have been used for risk stratifying HCC. However not many studies have combined all of them. It is therefore important to risk stratify HCC especially with newer PET based metabolic parameters to see if they match with existing clinicopathological parameters to achieve better clinical outcome. The objectives of this study were twofold; firstly, to evaluate [18F]FDG PET as a prognostic biomarker to predict tumour recurrence. Secondly, if clinicopathological parameters combined with PET indices increase the risk correlate in predicting HCC disease recurrence.
Methods: Records of 200 adult HCC patients were analysed, (6:1, Male: Female; mean age ± SD, 52 ± 2 year). All underwent [18F]FDG PET (PET MR: PET CT = 168:32) and subsequent therapy. Patients had a follow up for at least 15 months or onset of first recurrence, whichever was earlier. Clinicopathological data, alpha-fetoprotein (AFP) titres, SUVmax and few other PET indices were documented along with details of first recurrence. Statistical analysis was also performed.
Results: In a multivariate analysis of various prognostic factors including T (SUVmax)/ L (SUVmax), serum alpha-fetoprotein, T stage, size of tumour, and vascular invasion of tumour, T (SUVmax)/ L (SUVmax) was the most significant with a cut off value of 1.9. Only vascular invasion of tumour and AFP titres had additional significance. 16% ( 32/200 patients) developed recurrence (OR 1.673). Comparing the low and high AFP titres by Kaplan Meir curve, P was found to be 0.039 that predicted a worse prognosis in patients with higher AFP titres. Similarly patients with higher SUV T/L: ratio of tumour SUVmax to liver (> 1.9) also revealed higher recurrence rate. Cut-off SUVmax was 3.03 g/ml in our series (range 2.5 - 23.8 g/ml) and found to be strongly associated with AFP, tumour size, number, and histological grade of tumour.
Conclusion: Our study shows that PET based metabolic indices are effective robust tools to predict tumour recurrence in aggressive HCC. Secondly, when clinicopathological parameters are combined with PET based indices there is better prediction of HCC recurrence and one can reclassify HCC patients into mild, moderate, and high-risk groups. We found it very useful in predicting poor clinical outcome especially in high-risk HCC patients; so that stricter surveillance measures can be recommended to identify early recurrence and offer appropriate therapy. The strength of this study lies in the fact that the observed associations between the combined parameters were found to be stronger than those reported in the past. 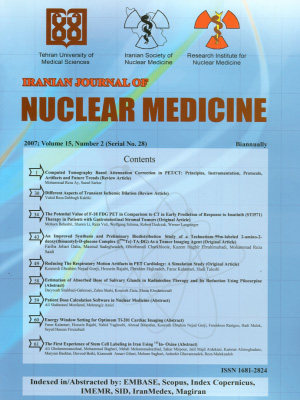